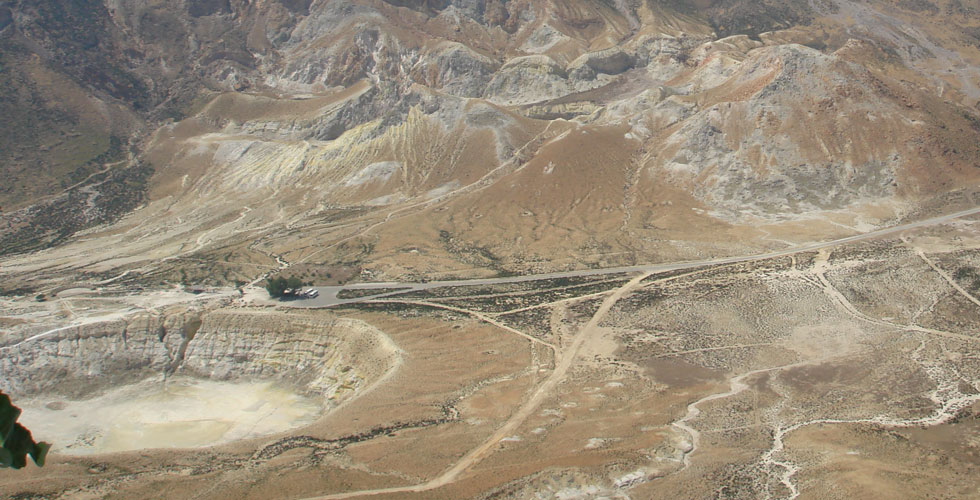 Nisyros is the youngest of the large volcanic centers in Greece and is included along with Methana, Milos and Santorini as one of the active volcanoes in Greece. The oldest rock formations are 160,000 years old, while the youngest (prehistoric) are 15,000 years old and cover the entire island. Most of Nisyros is mountainous, volcanic and very fertile. The island is composed of volcanic rock formations, with swelled elevations that were formed by previous volcanic activities. The various rock formations, (basalt etc.) have been used for the construction of various buildings such as the Palaiokastro and the bell tower of the Church of St. John the Theologian just outside Nikea. The base of the island has been formed by lava. The rocks are covered by pyroclastic deposits and volcanic mud. Two possible eruptions occurred several millennia ago, around 25,000 years back.

A large depression occurred in the astern part half way across the island.
The western crown of this depression forms the highest peak of the island.

The peak of Saint John is in the eastern part of the depression and is about 100 m above sea level. In 1956 schisms emitting smoke were noted in the ground next to the western and southern sides of Rammos.

It is possible that the volcano erupted in 1442. In 1872, an eruption occurred that was accompanied by earthquakes, backfiring and red and yellow flames. Ash and other elements erupted and covered the ground of Rammos. During the eruption of 1873, a crater of about 6 to 7 meters was formed and ash and mud spewed out. The ground of the areas of Lakkoi and Rammos were transformed into a lake with hot salty water, the water that spilled out of the crater. The most recent violent eruption was in 1888 which formed a cylindrical aqueduct of volcanic elements with a diameter of at least 25 meters.